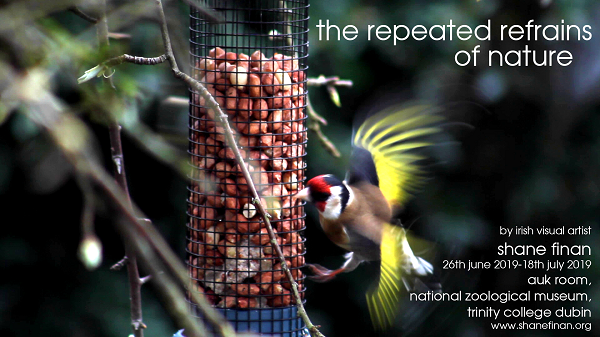 The interactive digital artwork The Repeated Refrains of Nature by Shane Finan will be exhibited in the Auk Room, The Zoological Museum, Trinity College Dublin, opening on Wednesday, June 26th, 2019. The artwork explores the concept of bird depopulation.
In 1962, scientist Rachel Carson published her magnum opus, Silent Spring. In this book, she documents over ten years of research on the effects of pesticides on the soil and animal life in the USA and Europe. The book focuses on the decline of bird life in areas where pesticides were widely used. Through this research, Carson began the early conversation on ecology, and preceded the idea of the ‘Anthropocene’, now a common term in journals and newspapers. The term refers to the era when human beings began to change the environment that we operate in, primarily through large-scale industry.
From the year 2000, the decline in bird populations has been tracked by scientists across the globe, particularly in Europe where ecology is long established. The declines occur in both sea and land birds. These declines are equated to different factors: the loss of food-stuffs (insects, fish, meadows), changes in temperature and climate, and loss of areas of habitat. Most of the detrimental effects on bird populations have been found to have human causes, from the continued use of pesticides, to over-fishing, to single-crop farming.
The Repeated Refrains of Nature is an artwork created in 2019 by visual artist and researcher Shane Finan. It is funded by the Trinity College Dublin Visual and Performing Arts Fund. The artwork takes its name from a quote by Rachel Carson from her book, The Edge of the Sea: ‘There is something infinitely healing in these repeated refrains of nature, the assurance that night after night, dawn comes, and spring after winter.’ The Repeated Refrains of Nature is an interactive digital artwork that uses six video monitors to show videos of common garden birds feeding, presented much like a security control room multi-monitor setup. When a person enters the room, the birds fly off screen, leaving empty feeders.
The artwork invites visitors to consider the human role on bird depopulation, exhibited among the extinct and endangered birds on show at the Trinity College Dublin Zoological Museum. Placed as it is, among other bird and animal species, the audience are asked to consider what a world without birds would be like. By remaining motionless, the birds may reappear, suggesting that reducing human action can also reduce the loss of species populations. Technology holds the artwork together as both monitor and controller.
The artwork will be exhibited in The Auk Room, Trinity College Dublin Zoological Museum, from Tuesday June 25th to Thursday July 18th, with an official launch on Wednesday, June 26th at 6pm. The launch will include short talks from the artist Shane Finan, the museum curator Dr. Martyn Linnie, and a reading from poet and professor Ignatius McGovern.
The Zoological Museum situated in the Zoology Building, Trinity College is open to the public from June 1st to August 31st each year. The collection contains over 25,000 objects many of which are over 200 years old. There are many examples of extinct and endangered species including Ireland¹s last Great Auk (declared extinct in 1844), the Tasmanian Wolf and the Great Indian Rhinoceros. While admission to the Art installation is free, a small entrance fee to the museum applies.
Finan is an artist from Sligo working with mixed media artworks. He lives in Lockstown, Co. Wicklow, and works in the School of Computer Science, Trinity College Dublin. He is Project Manager of computer science project FÍOSÍN, investigating ways to use social media in natural disasters, which is developing into a spinout company. The tension between technology and nature, between life in the city and life in the countryside forms part of his work. In recent years his work has been exhibited in Ireland, the UK, Iceland, Poland, the USA and China. His next project is as part of the touring exhibition, Over Nature, curated by Valeria Ceregini, which tours six venues in Ireland and the UK between August 2019 and June 2020.
The artwork will be open to the public at museum opening times, every day including weekends and bank holidays from 10:30am-4pm.
Posted by Catherine O'Connor, Head of External Relations
School of Computer Science and Statistics, Trinity College Dublin
catherine.oconnor at tcd.ie