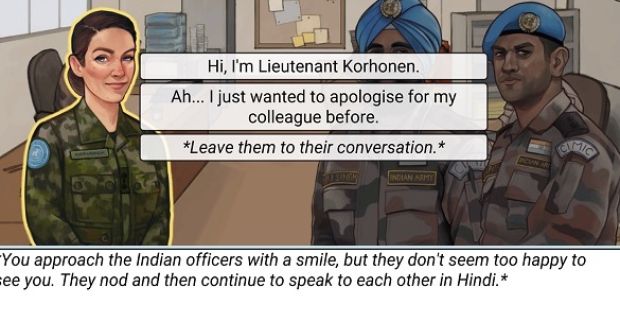 A screengrab from the Gaming for Peace simulation training software developed with the aid of a €2m grant from the EU’s Horizon 2020 project.

A “visual novel” game to train international military and police in peacekeeping skills has been unveiled by researchers at Trinity College Dublin.

The simulation software will help personnel in “soft” skills such as communication, cultural sensitivity and gender awareness. It has been developed by an EU-wide consortium led by sociologists, computer scientists and psychologists at TCD as part of the Gaming for Peace (GAP) project.

Dr Mads Haahr, assistant professor in computer science at TCD, demonstrated the software at the Gaming for Peace Conference on Thursday.

It is planned that all military, police and civilian personnel being deployed in EU conflict prevention and peace-building missions such as those to Afghanistan, Palestine and Libya will be able to receive training through the game.

The software allows users to experience simulations of challenging scenarios from conflict and peacekeeping missions. They can enter the game as avatars, to role-play as a member of another organisation, a different gender or nationality.

Dr Anne Holohan, associate professor at the Department of Sociology at TCD, who is co-ordinator of the GAP project, said: “Peacekeeping missions are very complex missions with a lot of different types of organisations and different types of personnel, but they have to work effectively together to communicate and cooperate and there’s very little training in this area.

“We thought why not train peacekeepers in soft skills through a digital role-playing game because this allows them to practice and fail in a safe environment.”

She added: “It also saves a huge amount of money in terms of training. At the moment, any role play training involves bringing people from all over Europe into one location which is expensive and time consuming.”

Lt Colonel Tim O’Brien, school commandant of United NationsTraining School Ireland, said the school had been involved over the past two years in field testing and providing “scenario-based situations” which were now an integral part of the game.

“Soft skills are a necessary element of our pre-deployment training, regardless of whether it’s with the UN,Nato, OSCE or indeed the EU, so this tool will complement the current training that we use,” he said.

“There was a realisation that soft skills are more difficult to teach than standard military skills and it’s also harder to analyse the effectiveness of the training. So this is a use of modern gaming technology and it also acknowledges the fact that younger generations like using games. If you can combine games with education, then you have a successful product.”

Gaming for Peace was funded by a €2 million grant from the European Commission under the Horizon 2020 programme.

There were 14 partners in the project, from academia, the military, police, civil actors and business, including the PSNI, the Finnish military and Polish military, the Ted Kennedy Institute at NUI Maynooth, Upskill in Belfast, and Irish computer games company Haunted Planted, led by Dr Haahr.